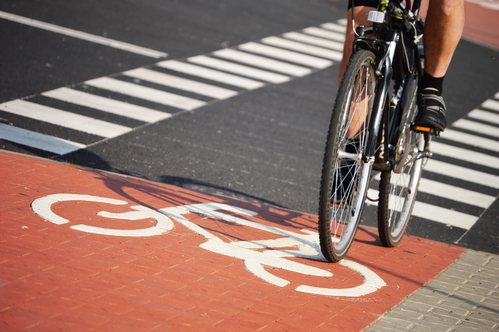 In a frightening accident, a bicyclist was hospitalized after he was hit and dragged by an SUV at the corner of 35th and Lowe in Chicago’s Bronzeville neighborhood. The bicyclist was drug by the car for approximately a quarter of a mile. His pelvis was broken in three places, and his femur was also fractured. The accident is under investigation, but the driver is facing several charges.

Recently, a 29-year old bicycle rider was killed in Chicago at the intersection of Oak and Michigan when he was hit by a double-decker tour bus. The preliminary report is that the young man “disobeyed” a red light and turned into the path of the bus. The accident is under investigation, but according to some witnesses, both the biker and the bus ran red lights. They say the light for the bus driver was green for left turns only.

A Chicago group, the Bicycling Ambassadors, works in conjunction with the Chicago Department of Transportation to encourage more bike riding and to educate bike riders on how to safely share the road with motorists. It has been in existence since 2001, and its mission is to prevent similar accidents to the recent one that took the life of the young Chicago man and the one that left a man hospitalized with serious injuries.

The Bicycling Ambassador program is a safety outreach and education team. The purpose is to “promote bicycling safety to all road users.” They also encourage Chicagoans to use their bikes more often. Although the Ambassadors work year round, they concentrate on the summer months.

They focus on presentations and reaching people at community events and at popular locations such as:

Some of the services the Ambassadors provide include:

The Ambassadors distribute about 2,000 headlights every year to bicyclists who are found riding unlawfully without them. They work with various communities to help them address their bicycling safety concerns and provide face-to-face education with those who are interested or have demonstrated a need for the education.

The Ambassadors target high profile intersections where accidents have occurred and hold educational events at the locations to teach both riders and motorists some of the most common dangers to watch out for such as:

The Ambassadors provide presentations to schools and summer camps upon request. They work with the Chicago Police Department to enforce transportation laws and to encourage those using all transportation modes to follow the law so the City will be a safer environment for all.

The Safe Cycling in Chicago Guide

The City of Chicago distributes a Safe Cycling in Chicago guide for bicyclists. The guide provides education and information about rules of the road and the laws that pertain to bike riders. For example:

Things cyclists need to watch out for include:

It is encouraging to see a focus on safety of bicyclists. Both motorists and bicyclists benefit from greater knowledge and awareness and appropriate driving behaviors. The results of bicycle vehicle collisions can be so severe and catastrophic, that all efforts to increase safety are to be applauded.

If you were injured in a bicycle accident, or someone you love was killed, please contact the attorneys at the Blumenshine Law Group for a free consultation with one of our experienced attorneys.