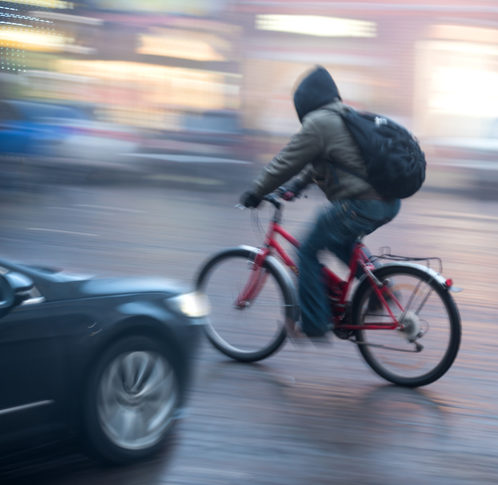 Earlier this year, a 53-year old Loveland Colorado bicyclist was critically injured in a collision with a car as she was navigating her way across the intersection of College Avenue and Conifer Street. She had successfully crossed the southbound lanes when she was hit by a northbound driver. The impact of the crash threw the bike rider onto the vehicle’s windshield, breaking the windshield and causing the roof to cave in. The car driver was uninjured, but the bike rider was unresponsive and rushed to the hospital. The northbound lanes of College were closed for approximately four hours while investigators did their work and the damaged car and bicycle were cleared from the roadway.

In one brief moment, the lives of both the bicycle rider and the driver were changed forever. The rider, if she lives, will no doubt have a long and difficult recovery. The driver, if found negligent, will be responsible for paying for the injured woman’s damages. Hopefully, the driver has adequate liability insurance coverage. Fault has not been determined in this case and the cause of the crash is under investigation. Unfortunately, this was only one of many accidents between bicyclists and motorists that occur every year. Cases like this can be complicated and it is important to hire a competent bicycle lawyer to help you navigate the legal system.

According to the National Highway Safety Transportation Administration (NHSTA), in 2013, approximately 48,000 people were seriously injured nationwide and 743 people were killed in crashes between bicycles and motor vehicles. Illinois was the site of 30 of those deaths making it the state with the fifth highest bicycle crash fatality rate.

Even when bicyclists obey the law and ride to the side of the road, they are still at risk of being injured when motorists:

The most recent relevant statistics concerning cyclists being hit by motor vehicles were compiled by the NHTSA for the year 2013 and include:

Cyclists are vulnerable to serious injury when in a collision with a vehicle no matter how much protective gear they wear. They can be struck and thrown and tend to suffer far more serious injuries than do vehicle passengers in accidents between two vehicles. For example, more than 50 percent of all fatal injuries are to the head. When not fatal, the head injuries are life-threatening and life-altering. Statistically, helmets provide protection, but are not required to be worn under Illinois law. Broken bones of all types are common. Some injuries are so severe, the injured person’s life is changed and will never again be the same.

Bicycle riders and vehicle drivers are expected to follow the rules of the road. When there is a crash between a bicycle rider and a motorist, the same rules of negligence apply that apply to any personal injury case. In order to prove the driver was at fault, the bicyclist must prove all the elements of negligence, the same as if the accident had been between two vehicles. When the proof shows the driver was negligent, and that the driver's negligence was the cause of the bicyclist’s injuries, the damages to which the bicyclist is entitled include, but are not limited to:

If you were injured in a bicycle accident, or if a bicyclist you love was killed or seiously injured by a negligent driver, contact the experienced bicycle accident lawyers at (312)766-1000, text to (312)719-2010 or email info@blg-legal.com for a free consultation. Be sure you do not miss your deadline for filing a claim.

Hidden Dangers in Nail Salons
“Keys to the Courthouse Doors” – Contingency Fees Provide People Access to Justice
Personal Injury Law Firm Settlement Mills: What to Look Out for
Who Is Liable in a Multi-Vehicle Crash?﻿
What are Punitive Damages and Why do We Need Them?
Car Accidents and Neurological Issues
Attorney General Releases Annual List of Recalled Toys Just in Time
Billion Dollar Verdict Against Hip Replacement Device Manufacturers
What is the Cost of a Motorcycle Accident?
Rising Insurance Rates and Distracted Driving