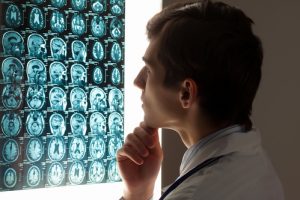 In 2014, comedian Tracy Morgan was in the national news when he suffered a traumatic brain injury (TBI) in a car accident on the New Jersey Turnpike. His friend was killed in the wreck and several others were injured. Morgan’s plight called attention to the devastating effects of brain trauma and the long recovery period facing those with a head injury.

One year after the accident, even though Morgan underwent months of therapy to learn to walk again, he still needed a cane. He reported that he experienced frequent headaches and memory problems. Two years later, he sat down with Oprah Winfrey to talk about his experiences. He shared with her that when he first woke up from a 10-day coma, he did not even know his name.

There was no question that the driver of a Walmart truck that plowed into Morgan’s car was negligent and his negligence was the cause of the accident. Walmart settled with Morgan for an undisclosed amount, but it was believed to be substantial.

Morgan’s post injury circumstances are not unique. Every year in the America, 2.5 million people experience a traumatic brain injury (TBI). More than 50,000 die as a result of a TBI and 275,000 are hospitalized. Although car accidents are the third leading cause of TBIs in general, they are the leading cause of TBI deaths.

How is a TBI Defined?

A Traumatic Brain Injury is the result of force to the head that causes unnaturally severe movement of the brain. When the brain slams from one side to the other, or back and forth, and hits the hard skull, as it often does in a car accident, a TBI may result. A whiplash, where the head is snapped forward and then backward when a car stops suddenly, as it does in a vehicle crash, often results in a TBI.

When the head comes to a complete stop after a car crash, the brain may keep moving and hit the inside of the skull. Depending on the area damaged, the injured person may suffer a contusion, which is a bruise to the brain. Sometimes, the injury causes the brain to bleed on the inside, which is a brain hemorrhage. It can lead to death if not recognized and treated. These same types of injuries occur when the head hits the steering wheel or another object in the car like the dashboard or windshield.

The Centers for Disease Control and Prevention (CDC) state that car crashes are the leading cause of TBI-related deaths in 15 to 19 year-olds. A 2009-2010 analysis of 55,000 teenagers injured in car crashes found that 30 percent of them suffered head injuries including concussions, skull fractures and TBIs. The author of the report expressed concern since, “The brain is the organ that is least able to heal, so prevention is the best medicine.”

Additionally, there are some people who never fully recover from a brain injury. They may need life-long support like rehabilitation, nursing care and housekeeping attendants. The effect is not just on the injured person, but on the families whose lives also change when their lives become devoted to caring for their injured loved one.

If you, or someone you love, suffered a traumatic brain injury in a car accident, contact one of our experienced Brain Injury attorneys at the Blumenshine Law Group for a free consultation.