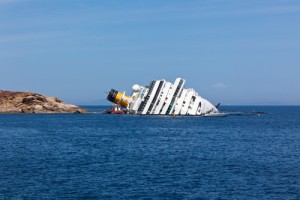 In early April, a San Diego Bay cruise boat crashed into the dock causing many potential serious injuries to the boat’s passengers.

In February 2016, the cruise ship Crown Princess, returned to its Los Angeles port after a two-week cruise on which 200 of the passengers contracted Norovirus.

A Canadian cruise ship that hit a wall caused 30 of its passengers to be injured in a June 2015 incident.

In 2012, 32 people died and hundreds were injured when the Costa Concordia, an Italian cruise ship, ran aground in shallow waters off the coast of Italy. According to news reports, the rock ripped a hole in the side of the hull almost one-third the length of the ship.

In 2011, 12 passengers on a Royal Caribbean cruise ship moored in Gibraltar were injured when a dockside oil tank exploded.

In the recent Crown Princess case, those who became ill will most likely will be able to collect damages based on negligent sanitary procedures. In the case of the Costa Concordia, the cruise ship company acknowledged liability and made settlement offers to all injured passengers.

Liability is not always so clear and injuries may occur on cruise ships that are not due to any negligence on the part of the cruise line. Just a few weeks ago, the Anthem of the Seas sailing off the coast of New Jersey was hit with hurricane force winds. The captain instructed the 5,000 passengers to stay in their rooms. Tables and chairs flew across rooms. Items fell off of high shelves. Passengers were given a full refund of their fare plus 50 percent off a future cruise. Some passengers on the Crown Princess were injured. Whether or not they will be able to collect for their injuries will depend on whether or not they can prove the cruise ship was negligent in its response to the storm.

Other types of injuries passengers may suffer on a cruise ship include:

Each incident must be investigated. Stairways may be unsafe because of loose railings or steps. Step risers may be the wrong height. A slip and fall may be due to a substance on the deck that was negligently not cleaned up in a timely manner.

Often, the cruise ship line is not liable for injuries suffered on shore excursions which are conducted by independent contractors, not cruise ship employees. The independent agency or person who arranged for the shore excursion may be liable if you can prove the agency was negligent and its negligence was the cause of your injury.

How a Cruise Ship Injury Attorney Can Help

Multiple issues must be investigated after cruise ship injuries that are not encountered in an ordinary personal injury case. A major issue is where to file the lawsuit. A Chicago cruise ship injury attorney will review all documents you signed and determine if you “agreed” when buying the ticket to file a lawsuit in a certain court. Your attorney will also obtain discovery concerning the history of the cruise line for negligence and other accidents similar to yours.

We concentrate in cruise ship injury and death claims. If you were injured on a cruise ship, contact us (312)766-1000 at the Blumenshine Law Group for a free consultation.