Elevator and Escalator Fatalities and Injuries 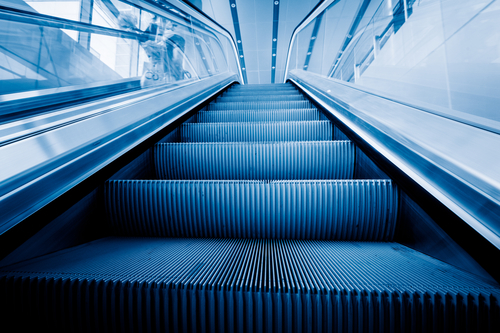 Injuries and death from elevator and escalator incidents can be particularly gruesome because of the force of the mechanisms and the vulnerability of users.

Common suggestions from safety professionals: When the elevator door opens, look before you take a step inside to be sure the elevator is actually there and you are not stepping into an empty shaft. On escalators, watch your loose clothing to be sure it does not get caught between escalator steps.

Deaths and injuries to workers working on or near elevators

Between 1982 and 2010, there were 45 deaths to people who were working on or near elevators. The categories of the incidents are as follows:

Deaths and injuries to passengers using an elevator while at work

Between 1992 and 2009, 89 people were killed who were using an elevator at their workplace just to move from one floor to the other. The majority of these deaths occurred when the elevator door opened, and the individuals stepped into and fell down an open shaft because the elevator car was not present. People have also died by being caught in between the door shaft and the elevator door.

Between 1997 and 2010, on average five elevator passengers every year were killed. Slip and fall accidents accounted for about half of the deaths as people tripped as they entered or exited the elevator. The rest of the deaths were due to people, again, stepping into an empty elevator shaft after the elevator door opened, but the elevator car had not arrived. Eight of those deaths occurred in Illinois.

Deaths of those working on escalators as passengers were not reported. For regular passengers, those not at work, two people died every year for a total of 39 deaths during the time period studied. Six of those occurred in Illinois. Nearly a third of the deaths were due to falls. The rest are referred to as “caught-in-between” accidents, which means the death occurred after a person’s clothing became caught between an escalator stair or sidewall.

More than three-fourths of the escalator injuries are due to falls, which cause severe injuries and even deaths. Small children and those 65 or older are the most common victims of escalator falls. Some fall getting on or off the escalator, others lean too far over the side and fall totally off the escalator and land on the floor below.

The CPWR report makes many recommendations on elevator safety improvement. They all involve better design and maintenance of elevators.

Some consultants report that escalators need a better design. For example, some engineers suggest that steps are not the right width and that the steps move too fast. One expert said the basic design of escalators has not changed in decades. If design flaws were corrected, injuries on escalators would be less frequent and entrapments between the steps would be eliminated. Overloading of the escalator would be less possible, which would also reduce accidents.

If you were seriously injured in an elevator or escalator accident, or a family member was killed in such an accident, contact our elevator and escalator accident attorneys at the Blumenshine Law Group in Chicago (312)766-1000 or email at info@blg-legal.com. We offer free consultations.