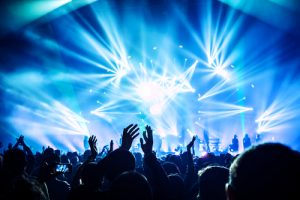 When Sharon E. Jones attended a Kanye West and JayZ “Watch the Throne” concert at the United Center in Chicago a few years ago, it turned out not to be a painful experience. At the end of the concert, the performers exhorted the audience members to leave their seats and come to the stage “to MF party.”

Jones decided to skip the “stage” party and go home, so she headed to an arena exit. As other concert attendees rushed the stage at the invitation of the performers, Jones was caught in the “crowd surge.” She was knocked down a flight of stone stairs and suffered serious injuries to her back, legs, neck and head.

In November 2013, Jones filed a complaint against, among others, the Watch the Throne concert promoter, Live Nation Entertainment, Inc. (Live Nation). She amended the complaint in February 2014 in which she alleged that Live Nation was negligent in that it knew, or should have known, that the performers would call for the crowd surge. She also alleged that it was foreseeable to Live Nation that such an invitation could result in a “human tsunami” that could cause concert attendees to be injured, and that the surge was the proximate cause of her injuries.

Live Action worked hard to prevent Jones from having her day in court. It began by refusing to answer certain interrogatories (written requests for information) sent by her attorneys. The corporation did not want to answer whether or not it had been named as a defendant in any other case similar to Jones,’ or whether it knew about any other incidents similar to hers.

The case went from the Circuit Court of Cook County (trial court) and the Illinois Appellate Court. The Circuit Court, at one point, granted Live Action’s Motion for Summary Judgment, which meant the case was over. Live Action at that point had won without ever having to answer basic questions. Fortunately for Jones, the Appellate Court overruled the lower court and found it impossible to determine if Live Action was negligent until Live Action answered the questions posed to it by Jones. The Court determined it unfair for the concert promoter who benefited from its business enterprise to not have answer basic questions about prior hazardous incidents.

The appellate court noted that, to succeed on a negligence claim a plaintiff must prove:

The Appellate Court also noted that the duty of care was the “crux” of Jones’  case. The Court quoted the Illinois Supreme Court’s holding that the “touchstone” of a duty analysis is “to ask whether a plaintiff and a defendant stood in such a relationship to one another that the law imposed upon the defendant an obligation of reasonable conduct for the benefit of the plaintiff.” In order to determine if Live Action and Jones had such a relationship, the following questions needed to be answered:

If Live Action Had a Duty of Care, Was its Breach of that Duty a Proximate Cause of Jones’ Injury

The Court cited a basic principle of law:

The Illinois Supreme Court has long recognized that, “In general, every person owes a duty of ordinary care to guard against injuries to others. A person who breaches this duty is deemed negligent and may be held financially liable if his conduct proximately causes injury to another.”

In order to collect for damages, a plaintiff must prove that the defendant’s breach of its duty of care was a proximate cause of the plaintiff’s injury. The defendant’s conduct must “be deemed to be a substantial factor in bringing about the injury.” On the record before it, the Appellate Court could not determine if Live Action had a duty to Jones and, if so, was its breach of that duty a proximate cause of Jones’ injuries. Thus, the Court decided that the facts in Live Actions’ possession must be disclosed.

Appellate Court Allows Jones to Pursue Her Claim Against the Promoter

The Appellate Court held that whether or not Jones’ claim for damages could proceed against Live Action could not be determined until Live Action answered the interrogatories posed to it by Jones.  The Court opined, “The answers speak directly to defendant Live Action’s notice and knowledge of the frequency with which its performers encourage a crowd of people to leave their seats and move down toward the stage and concert attendees’ injuries that may result therefrom.”

Although this case was not handled by our office, our personal injury attorneys at the Blumenshine Law Group have decades of experience in holding corporations accountable for their negligence. Contact us for a free consultation.