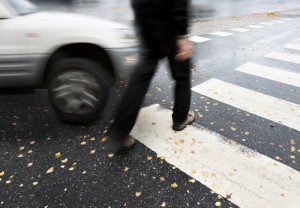 Pedestrians – whether walking, standing, jogging, skateboarding or rollerblading, can be seriously injured when struck by a car or truck. If you are sitting or lying near a roadway, you are also classified as a pedestrian. The chances of a pedestrian being hit by a vehicle and suffering serious injury or death are great.

According to the National Highway Traffic Safety Administration (NHTSA), nearly 5,000 pedestrians were killed and more than 66,000 pedestrians were injured when struck by a vehicle in 2013 in the United States. This means that a pedestrian is killed every two hours and one is injured every seven minutes!

If you were a pedestrian hit by a vehicle, you know how emotionally and physically traumatizing such an event can be. The trauma is greatly magnified when you discover the driver who hit you cannot be found, or is found, but either is uninsured or underinsured. Your medical bills (or co-pays and deductibles) mount and you are likely losing income. You want justice and fairness.

You are likely unaware that your own vehicle insurance will pay for your medical bills, other expenses, and for your pain and disability, under the terms of your own uninsured motorist or underinsured motorist coverage.

Although Illinois law requires drivers to have liability insurance to cover personal injury or death, the Insurance Information Institute (III) estimates that more than 13 percent of Illinois drivers have no insurance coverage. Recognizing that being in an accident with an uninsured driver is a big problem, Illinois also requires insurance companies to provide uninsured (UM) (including hit and run) and underinsured (UIM) motorist coverage with a minimum of $25,000. You can buy a policy with higher coverage limits. UIM kicks in and provides coverage if the at-fault driver does not have enough insurance to cover your medical bills and other damages and harms.

When UM and Hit and Run Coverage Applies

A Pedestrian who is injured by an uninsured or underinsured motorists can collect damages under their own UM/Hit and Run policy under the following conditions:

You may think you don’t need UM/UIM coverage because you have health insurance that will pay your medical bills. However, you likely have far more financial losses in addition to medical bills. For example, most health insurance plans have deductibles and co-pays.  UM/UIM coverage will also pay for other financial losses such as lost wages due to your inability to work based on the injury you suffered. It may also pay for job retraining if you were injured so severely you are unable to return to your former employment. You may be eligible for reimbursement of other costs you incur that are related to your injury.

The biggest harms you sustained are likely non-financial. If you were seriously injured, you have had daily pain and disability. Uninsured and underinsured motorist coverage pays for those harms.

A competent Insurance Attorney will work with you and for you to ensure that receive the maximum compensation to which you are entitled under your UM/UIM policy.

To learn more about how your own UM/UIM insurance policy may benefit you if you or a family member is involved in a vehicle pedestrian accident, download the eBook titled “Am I Covered?” by Scott A. Blumenshine. If you were involved in an accident with an uninsured or underinsured driver, you can contact us to schedule a free consultation. We will review all the circumstances of your case and if your case meets the criteria for a UM/UIM claim, we will pursue remedies with your own insurer on your behalf.