(Snapchat has a feature that shows how fast you’re moving) 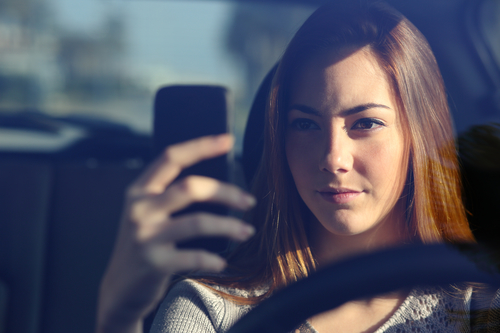 Snapchat. You've likely heard about this mobile app and may frequently use it yourself to send photos, videos and messages to your friends. Snapchat is different than texting, though. If you receive a Snapchat photo or message from a friend, you only have a few seconds to look at it before it disappears. So the instant “now you see it now you do not” feature is a major attraction of the app.

One very controversial feature is Snapchat’s ability to record vehicle speed. Drivers are known to take a photo of themselves with an overlay that shows the speed at which they are driving. They send this to their friends who see, in real-time, how fast the driver is driving. Some drivers frighteningly using speed overlay as a contest as they go over the speed limit, snap a photo or video, and send it to their friends. It captures, for a moment, a “Look at me” expression with a “See how fast I am going while snapping photos and videos” message.

Snapchat actually turns its app usage into a contest. It gives points to its users for each use. One thing Snapchat does not do is advertise the number of serious vehicle accidents that occur when users send messages, photos or videos while they are driving, capturing the speed app overlay.

One former Uber driver suffered permanent brain damage when he was plowed into by a young woman who had just recorded herself on Snapchat driving 107 miles per hour. Her passengers said she had actually reached 113 miles per hour as they were pleading with her to slow down. After the accident, as the driver was being carried away on a stretcher, her head encased in a brace with blood rolling down her face, she posted Snapchat photo of herself with a caption, “Lucky to be alive.”

The Uber driver and his wife are suing Snapchat, claiming it put a dangerous product on the market. The complaint contains the following allegations: “On and before September 10, 2015, Snapchat knew that wrecks had occurred due to the use of Snapchat’s app while driving at high speed,” the complaint says. “Despite Snapchat’s actual knowledge of the danger from using its product’s speed filter while driving at excessive speeds, Snapchat did not remove or restrict access to the speed filter.”

Snapchat refused to comment on the lawsuit, saying it could not speak about a pending case except that a Snapchat spokesperson commented that the app “has always included a warning not to use it while driving.” That is a disingenuous statement because the purpose of the app is to encourage users to record driving speed.

As for the young driver, what was solely a civil injury claim against her has now been escalated into criminal charges including one felony count. The young lady has placed herself in jeopardy of long term prison confinement and a very difficult life of recovering from that circumstance.

In a horrible tragedy, just a few days before Christmas 2015, three young women in their early 20s, were killed when the speeding car they occupied rammed into the side of a parked tractor-trailer. Their car burst into flames. All three women died in the fire. An investigation revealed that the driver had been posting Snapchat photos all evening of her drinking at a bar. The final Snapchat shot showed her speeding at 73 miles per hour.

Because the Snapchat photos disappear, and the driver’s phone was destroyed in the fire, direct evidence of the Snapchat posts is not available. However, the proof of the speeding and "Snapchatting" has been provided by witnesses who say they saw the photos that the driver sent them. The Snapchat friends say she was seen drinking, then speeding. There is also some surveillance video that shows the car speeding. The investigation is ongoing. Whatever the results, it is clear that the Snapchat use was a contributor to sad deaths.

Experienced Attorneys in Your Corner

If you were injured in an accident and suspect the cause of the accident was a distracted driver who was using Snapchat or other phone application, contact one of our distracted driving attorneys at the Blumenshine Law Group at (312)766-1000 or email at info@blg-legal.com. We would be glad to offer a free no obligation consultation.