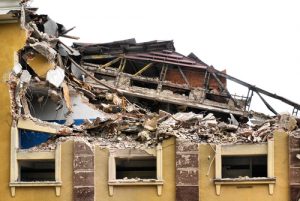 In August 2005, Hurricane Katrina, “one of the deadliest hurricanes to ever hit the United States” wrought devastation upon the Gulf Coast. It caused approximately $108 billion in damages and killed 1,833 people. The Coast Guard rescued more than 34,000 people from the floodwaters. Winds blew to speeds of up to 140 miles per hour. More than one million housing units were either totally destroyed or severely damaged. Some by wind, some by flooding, some by both.

Many homeowners did not carry flood insurance, but had coverage for loss due to wind. They filed claims with their insurers expecting to be compensated. In at least one case, State Farm Insurance Company instructed its adjusters to mark wind damage as flood damage so the company would not have to pay the claim. This was documented by two sisters, Cory and Kerry Rigsby, who both worked for a company hired by State Farm to assess damages for individual policy holders. The Rigby’s filed a lawsuit against State Farm alleging that the company acted fraudulently in denying claims.

When insurance policies did not cover the damages caused by Katrina, the federal government ( taxpayers)  stepped in with financial support to assist families in rebuilding their homes under the National Flood Insurance Program. Based on their experience with State Farm, the two sisters filed a lawsuit against it under the federal False Claims Act, often referred to as the “whistleblower” statute. The statute allows individuals to sue companies for defrauding the government. When the government believes in the merits of the case, as it did here, it steps into the fight and brings its resources to help the individual citizens in their pursuit of the case.

Some damning evidence was brought against State Farm. The sisters testified that engineers were pressured by State Farm to conclude that damage was caused by water instead of wind. The case included an infamous sticky note in one homeowner’s file. The note was attached to an expert report blaming wind for the loss, that said, “‘Put in Wind File. DO NOT Pay Bill. DO NOT discuss.”

Since the government paid claims due to State Farm’s fraudulent handling of the claim, the sisters alleged State Farm defrauded the government. It took years of litigation, but in early 2014, the sisters finally won their case in the federal district court.  State Farm was ordered to pay $750,000 in damages. The insurer was required to pay an additional $3 million in legal fees to the attorneys who prosecuted the case. The award was upheld on appeal.

State Farm, the Rigby Sisters and the U.S. Supreme Court

State Farm did not admit responsibility and did not accept the decisions of the federal trial court jury nor of the federal appellate court.  It pursued its case to the U.S. Supreme Court where the High Court has agreed to consider whether or not the entire case should be dismissed as though it never happened.

One provision of the Whistleblower Statute is that when a case is filed in court, all pleadings are kept under seal for 60 days. In the State Farm case, the original attorney for the Rigbys distributed information about the case to news media. Even though no media attention was given to the case during the 60-day period, State Farm alleges that the violation should render the case void. They made this same claim in the district and appellate courts and lost in both places.

This Fall, the Supreme Court heard oral arguments. Although questions the justices ask attorneys during oral argument are not indicative of how the Court will eventually rule, in this case, the questions may offer some insight into the leanings of the Court.  Justice Ruth Bader Ginsberg pointed out that the purpose of the statute’s sealing requirement was so defendants like State Farm do not get early knowledge of the lawsuit, which may jeopardize the case. Since not one news organization that knew of the lawsuit revealed that information to the public, there was no harm.

Chief Justice John Roberts noted that the only harm would have been to the government, and the government was arguing vigorously against State Farm’s request for dismissal. This fact, according to Roberts, made State Farm’s argument ring “a little hollow.”

The Supreme Court’s opinion in the case is expected to be published by the end of June 2017.

If you are having trouble convincing your insurer to pay for major damage to your home, and the company says your type of damage is not covered by your policy, call our fraudulent claims attorneys at Blumenshine Law Group. We have years of experience fighting against insurance companies, some of whom act in bad faith. We take every situation seriously and offer you a free consultation. Contact us as soon as possible.