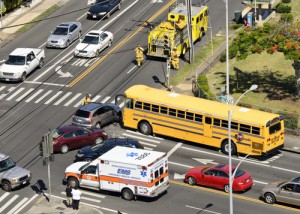 Whether you are driving a few blocks to the grocery store, across town to the shopping mall, or you are on a long road trip, be careful when driving. The National Highway Traffic Safety Administration (NHTSA) recently released a report finding a nationwide increase in traffic fatalities for the first six months of 2015. According to the report, this represents “a troubling departure from a downward trend.”

Unfortunately, Illinois has followed the national trend and traffic fatalities have increased from 924 in 2014 to 1,001 in 2015. This statistic includes all vehicular crashes, including those involving pedestrians, motorcyclists and motorcyclist fatalities.

Some officials have attributed the increase in fatalities to lower gas prices which have encouraged people to drive more. But, the NHTSA Administrator points out that low fuel cost is not the only factor contributing to traffic fatalities. Statistics show the following causes of fatal accidents in 2014 from across the nation.

Is there any question that more drivers are now more distracted due to smart phone use? The increase risk of harm on the roadways due to driver distraction is clear. Drivers cannot safely multi-task. Driving must be the sole focus of a driver’s attention.

According to NHTSA research, 94 percent of all traffic accidents are due to poor decisions made by the driver. The Administration will be conducting meetings around the country with state officials to receive input on what measures need to be implemented in order to reduce traffic fatalities.

The Illinois governor, in conjunction with the Illinois Department of Transportation, released a report of 2014 fatal traffic accidents in an effort to educate the public and reduce the number of deaths due to vehicular crashes. Some of the facts and statistics are:

There were a total of 296,049 car wrecks in Illinois in 2014. There were 11,755 incapacitating injuries in addition to the 924 deaths. This means that at least two people in Illinois were killed in traffic accidents every day. Sad – and preventable. Every hour, more than nine people were seriously or severely injured. Again, this is eye-opening and the fact is that safe habits could prevent most of these statistics.

Distracted Driving is a Major Cause of Traffic Accidents

The NHTSA reports that at any one moment, 660,000 drivers in the U.S. are using their cell phones for texting or are manipulating some type of electronic device. According to the U.S. Transportation secretary, “Distracted driving is a serious and deadly epidemic on America’s roadways. There is no way to text and drive safely. Powering down your cell phone when you’re behind the wheel can save lives – maybe even your own.”

In November 2015, a Chicago teenager was sentenced to two years of probation and 150 hours of community sentence for killing a bicyclist while she was using the GPS on her cell phone. She now has a felony criminal record and could have been sent to prison for three years, but the judge was lenient due to the college student’s extreme remorse. But, remorse does not save lives. She will spend her community service educating others about the dangers of distracted driving and fatal consequences that may ensue.

If someone you love was killed or injured in a car accident in Illinois, you may be eligible to collect damages for your loss. Contact us at the Blumenshine Law Group for a free consultation. (312)766-1000.