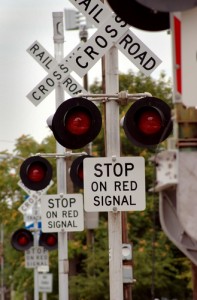 Twenty years ago, a train slammed into a school bus at a train crossing in Fox River Grove. Tragically, seven students were killed and many more injured. It was a little after 7 a.m. when the bus driver pulled across the tracks and stopped at a traffic signal. The driver later said she was unaware that the back three feet of the bus remained over the tracks in the path of the oncoming train. She was also unaware that the crossing gate hit the bus on its way down and did not hear the train warning whistle even though the engineer continuously blew the horn to try and warn her to clear off of the tracks.

Crossing Signal Changes as a Result of the Accident

According to an Illinois Commerce Commission senior rail safety specialist, “The crash changed everything—across the state, across the nation and around the world.” More traffic signals were added at each crossing, better connections “between traffic signals and train warnings” were added as well as more signs to warn motorists of where to stop for the trains and instructions of the importance of not dwelling on the tracks.

The train warning improvements have helped reduce accidents and fatalities. In 1995, the year of the crash, there were 4,633 train and vehicle crashes across the country with 579 deaths and 1,894 injuries. In 2014, the statistics across the board were substantially reduced with only 2,287 crashes, 269 deaths and 849 injuries. Illinois was the site of 134 of those collisions and 24 of the fatalities. But, according to experts, even though there are far fewer crashes and fatalities than there were 20 years ago, there are still improvements that need to be made.

Illinois has 7,400 miles of railroad track with 7,720 track and highway crossings, which increase the risk that more accidents will occur in the state than in other states without this number of crossings. Only Texas has more railroad track miles. Some suggestions experts make for improvements is to install, at every crossing, “four-quadrant gates.” These gates would block traffic on all sides with long arms that would make it impossible for drivers to drive around the gates. If this would save lives, these investments must occur.

Vehicle train collisions increase the fatality risk by 20 times over vehicle to vehicle crashes. According to the National Highway Traffic Safety Administration (NHTSF), a train hitting a car is equivalent to a car hitting a soda can. One Illinois expert says that if you are stuck on the tracks and have to choose between being hit by the train or entering an intersection and being hit by a car, drive into the intersection. He points out that, “It is better to be hit by a 2-ton car than a 12 million-car train.”

Just changing signals is not enough. More education is needed. The University of Illinois conducted a study in 2013 and found that nearly half of Chicago bicyclists and pedestrians admitted that they often ignored warning lights and bells at railroad crossings and crossed the tracks despite warning signals. In 2014 in New York, an SUV was slammed into when it was stuck on the tracks as the crossing gate came down.

An Illinois railroad engineering professor noted that the New York crash could have been avoided if the SUV driver had been aware that he should not have entered the grade crossing unless he had at least a car’s length in front of and behind him. Every driver should know to watch for this and not enter the crossing grade unless they have that buffer area of protection.

Technology at rail crossings is not fail proof. Human error can still lead to calamity. There is “engineer” error which drivers, pedestrians or train passengers cannot prevent no matter how careful they are if the other driver is careless. In California in 2008, 25 people were killed and 135 seriously injured when a commuter train crashed into a freight train. It was determined that the commuter train engineer was texting and failed to see a train signal telling him to stop. In the summer of 2015, a Philadelphia passenger train derailed, killing eight and injuring more than 200 people. Investigation results include the finding that the train was traveling 102 miles in a 50 mph zone.

If you were injured in a train crash, or if someone you love was fatally injured, contact us at the Blumenshine Law Group for a free consultation.