When Accidents Cause Broken Bones and Damaged Joints 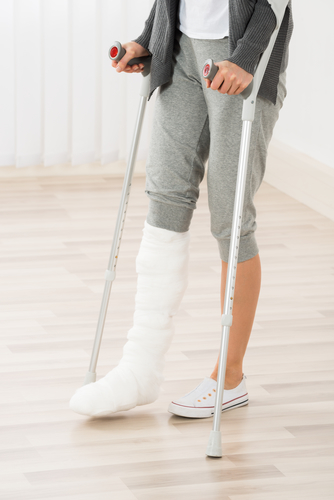 Earlier this year, a police officer suffered multiple bone fractures in his face, leg, and ankle after being crashed into by a truck driving the wrong way on the highway. The officer survived, but according to a news report, he “has many surgeries ahead of him.” This indicates the breaks were severe and will need more than a simple cast to repair them.

Common injuries during Chicago winters are broken legs and wrists due to people slipping on an icy walkway surfaces.  When people slip, they typically put their hands out to try and break the fall – this often results in a broken wrist or broken hand bones. Leaving the emergency room with only a cast may seem like a victory when many such injuries require surgery and weeks or months of rehabilitation.

The body has a total of 206 bones. Out of these number, five are broken more often than any others.

Even if a bone is not broken, joint injuries can cause severe pain and disability. Quite often people believe, and hope, that their symptoms will pass with time. Although that may be true with minor muscle pain, severe injuries to the ligaments or cartilage often requires intensive medical intervention.

A common example of a severe joint injury that does not involve a bone fracture is a rotator cuff tear in the shoulder. This is an extremely painful condition that can render people nearly unable to use their arm. Another common, but often overlooked, injury that occurs in car collisions is damage to the sacroiliac joint. This is the joint at the base of the spine that connects the spine to the pelvis and supports the weight of the entire body when a person is standing upright. The sacroiliac joint is damaged in the same type of accident that can cause a whiplash, which is injury to the soft tissue in the neck or to the cervical spine.

These injuries often occur in accidents that seem minor. For example, when a car is stopped for a red light and another car hits it from behind, the jarring motion which sends the body rapidly forward and then rapidly backward can damage the sacroiliac joint or even break it. “Fender-benders” or “low-impact” accidents are common culprits of such injuries.

Unfortunately, a broken bone or damaged joint can result in extensive medical bills, loss of wages due to time off of work, and long-term need for physical rehabilitation. If this happened to you, you may even need vocational retraining if the injury is so severe you are unable to return to work in your former occupation.

The law provides a remedy for those who are injured due to negligence. Your injuries are legal “damages” for which you may be entitled to compensation under our legal system.

If your injury was caused by the negligence of a corporation or another person, whether a driver of a vehicle, a retail store owner, operator of a restaurant, or any other entity or individual person who has a duty to provide you a safe environment, contact one of our Chicago broken bone attorneys at the Blumenshine Law Group for a free consultation (312)766-1000.

When Pharmacists Make Dangerous Mistakes, Who is Responsible?
Pedestrian Vehicle Accidents with Uninsured or Underinsured Motorists
Bar Found Liable to Patrons for Severe Injuries Due to Assault in Parking Lot
Personal Injury Law Firm Settlement Mills: What to Look Out for
Pedestrian Accidents and Compensation
Dog Bites and Animal Attacks